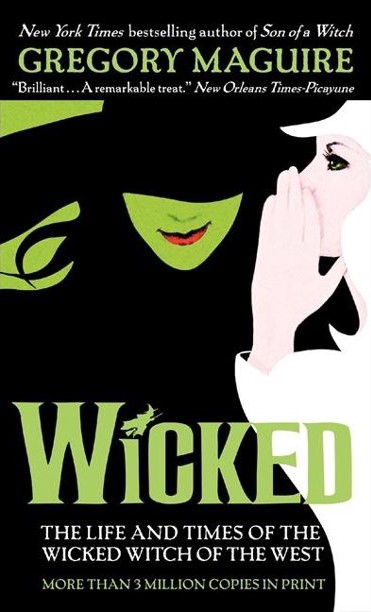 Lately, I have taken a break from my classics to read a more contemporary novel. This week, I am reading Wicked: The Life and Times of the Wicked Witch of the West by Gregory Maguire. It is a revisionist look at L. Frank Baum’s The Wonderful Wizard of Oz. The novel abrogates readers’ prior knowledge of the events of the book and movie by presenting the origin of the character who would become the Wicked Witch, Elphaba Thropp. The retelling of events is also a political and social commentary on the nature of good and evil, predominantly taking place before Dorothy Gale’s arrival in Oz. The narrative perspective shifts, but the main focus is on the misunderstood Elphaba and her tragic transition into the wicked being that her inexorable fate portends. The novel is divided into five parts, each based on the location of events.

Part one, set in Munchkinland, described Elphaba’s upbringing. She is the daughter of Melena Thropp, the granddaughter of the Eminent Thropp of Munchkinland who serves as the ruler of the territory. Her husband Frexspar is a minister, whose frequent travels leave Melena lonely; she takes comfort in strangers and acquires a reputation as a woman of many men. At some point, Melena is approached by a traveling necromancer heavily implied to be the Wizard of Oz himself. After giving her a delectable potion called “Miracle Elixir” from a green bottle, he has his way with her. Around nine months after these events, Melena’s first daughter Elphaba is born with green skin. After revealing herself to be a vicious child, her parents put a muzzle on her. They are further alarmed by her phobia of water, which seems to cause her pain.

Dismayed at his child’s asperity and savagery, Frexspar concludes that this must be his god’s deprecation for failing to protect his parishioners. He leaves once again to become a missionary, leaving Melena to the onerous task of caring for her daughter. A little over a year after this, a traveling glassblower known as Turtle Heart visits Melena’s home. She offers him food and drink, and in return he blows an ornate reflecting mirror for Elphaba. With Frexspar gone, she begins another liaison with Turtle Heart; and when Frexspar returns, he becomes close friends with Turtle Heart in part due to his religious zeal, and also his own attraction to Turtle Heart. The first section ends with the birth of Melena’s second daughter, Nessarose. Melena goes to great lengths to ensure her next child is not born green, which has unforeseen consequences: the future Wicked Witch of the East is born without arms. She is an ebullient fanatic for her father’s religion and much to Elphaba’s chagrin, becomes his favorite.

Part two, located in the land of Gilikin, opens with  Galinda, the future Good Witch of the North and sentient goat, Doctor Dillamond on their way to Shiz University where affluent Ozians attend to learn the rudiments of sorcery. When they arrive, Galinda learns she must room with Elphaba, whom she begins to taunt. They later become friends and begin attending Dillamond’s lectures together. Dillamond is a sentient goat, a member of a class of beings known as Animals, with the capital letter denoting those who are self-aware, and therefore hold civil rights equivalent to humans. Under the Wizard’s despotic reign, the Animals are discriminated against and are even treated like regular animals. Elphaba becomes active in Animal rights movements and sees Dillamond as something of a mentor. However, just as Dillamond is on the verge of a fantastic discovery about genetic similarities between Animals and humans, Madame Morrible orders him killed. As the headmistress of Crage Hall, it is Madame Morrible’s job to scout out talent in her class of soceresses and act as a spy for the Wizard.

To commemorate Dillamond’s memory, Galinda adopts Dillamond’s idiosyncratic mispronunciation of her name, Glinda. Glinda and Elphaba befriend Fiyero, a new student who is a prince from the distant territory of the Vinkus, around the sam time Nessarose is sent to Shiz. Frexspar gifts Nessarose a pair of beautiful slippers burnished with glass beads, which Glinda later enchants so that Nessarose may walk unassisted. Shortly thereafter, Madame Morrible sequesters Elphaba, Nessarose, and Glinda and makes them an offer. The three students will become “ambassadors of peace.” Elphaba will go east to Munchkinland, Glinda to the north in Gilikin, and Nessarose to Quadling Country in the south. Morrible informs them that they would be a part of a secret cabal of actual rulers of Oz, revealing that he has extraordinarily little tangible political power and is little more than a flaccid figurehead. Before they accept, Glinda and Elphaba travel to the Emerald City to plead the Animals’ cause to the Wizard. After being dismissed, Glinda returns to Shiz and accepts her position, meanwhile Elphaba, disgusted with Glinda’s eclectic ambition, stays behind, and organizes a movement to free Animals and depose the Wizard.

Part three continues in the Emerald City, five years after the events of the previous section. Fiyero visits the City to settle business with politicians when he has a chance encounter with Elphaba. He tells her that her friends at Shiz miss her and they embark in a love affair. Fiyero neglects his wife and children in the Vinkus for fear of losing his love, and he accompanies Elphaba on her next journey: to kill Madame Morrible. She finds she cannot accomplish this, as children are blocking her line of fire. He retires to her apartment where the Gale Force, the Wizard’s secret police, find him while searching for Elphaba. He is kidnapped and presumably murdered by the guards. Elphaba flees the city and now, suddenly finding herself impecunious, takes refuge in a convent where she gives birth to Fiyero’s son.

Part four begins as Elphaba travels to the Vinkus where Fiyero was prince and stays in the castle of Kiama Ko with his widow. Accompanied by a child to whom she claims no relation by the name of Liir, they become a part of the family. Manek, one of Fiyero’s sons, convinces Liir to hide in a well during a game of hide and seek, nearly killing him. Enraged, Elphaba makes an icicle break above Manek, penetrating his skull and killing him. Fiyero’s widow is overwhelmed with grief, and Elphaba senses her new “family” dynamic is moribund. She receives a fortuitous letter from Frexspar, asking for help dealing with Nessarose, who has inherited the matrilineal title of Eminent Thropp after Elphaba being presumed dead. With her newfound power, Nessarose has winnowed away Munchkinland from the region of Oz. She has also become a sorceress despite her religious conviction, viewing her magic as miracles. Due to her one-sided business deals, cruel ways, and use of sorcery, she becomes known as the Wicked Witch of the East. After refusing an offer to rule Munchkinland with her, Elphaba prepares to leave, and Nessarose sarcastically promises Elphaba her infamous enchanted slippers after her death.

Part five picks up seven years later, when a tornado hits Munchkinland and drops a house on Nessarose. Recovered from the detritus of Dorothy Gale’s house were Nessarose’s enchanted slippers, which Glinda gives to Dorothy. After Elphaba and Glinda have a warm reunion at Nessarose’s funeral, Elphaba is enraged to learn that Glinda gave away the slippers. Elphaba returns to Kiamo Ko to news that Dorothy and her friends are making their way to her castle, to kill her per the Wizard’s orders. Elphaba has convinced herself the Scarecrow is Fiyero in disguise and sends several enslaved animals to guide the friends to her castle, but they are all killed by the group who perceive them as threats. When they arrive, Dorothy tells Elphaba she was not sent by the Wizard to kill her, but that she came on her own accord to apologize for killing Nessarose. Elphaba is angered by the fact that Dorothy asks her forgiveness, as no one has forgiven her for her perceived wrongs her entire life. Elphaba waves her broom until it catches on a torch and accidentally sets her skirt on fire. Dorothy puts it out with water, melting her.

Dorothy returns to the Emerald City with a bottle of Miracle Elixir, greatly upsetting the Wizard. Rumors hold that she never truly returned to Kansas and that her true whereabouts are unknown. The Wizard flees the Emerald City before a coup lead by his Gale Force attemtps to execute him and he returns to Kansas, where he commits suicide. With Munchkinland on the verge of civil war after clerics name the title of Eminent Thropp extinct and the coup plotters unable to form a new government, the book ends with the land of Oz in a state of ambient political turmoil.

The novel’s tone is a stark departure from L. Frank Baum’s Oz books and the 1939 MGM movie. The entirety of the novel probes the concept of evil in great detail, featuring complicated backstories of characters that reveal no one is completely good or evil, with the implication that a large part of the characterization of the Witches is driven by public perception. Many elements of the Wizard’s regime draw parallels to Nazi Germany, including the persecution of the Animals and the indoctrination students receive at Shiz, which perhaps could be explained by the fact that in his desire to write an exploration of evil, Maguire originally itended to write a biography of Adolf Hitler. After abandoning this idea, he returned to his childhood storybooks, where he realized the second scariest person in his subconscious was the Wicked Witch and decided to write a novel that would humanize her and analyze the origins of evil, as he had originally intended. In Wicked, Maguire excels in both of these endeavors with his revisionist take on a childhood favorite, creating an engaging and suspenseful modern masterpiece.