The Impact of the Lakers’ Black Mamba Jerseys 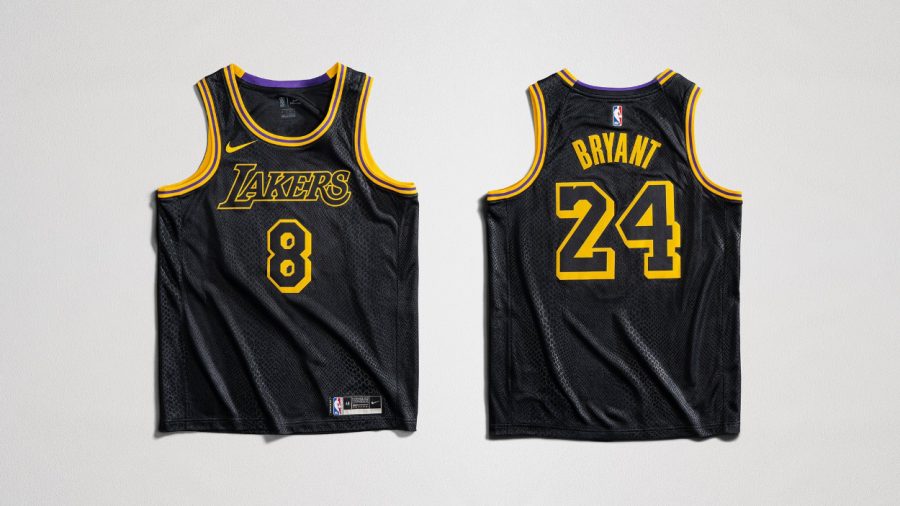 On the morning of January 26th, 2020, a helicopter carrying the souls of Kobe and Giana Bryant, alongside nine others, crashed out of the sky over Calabasas, California. The entirety of the NBA, the Los Angeles Lakers, and the world stood in condolence as they witnessed the heartbreaking tragedy of one of the greatest players to ever play the game of basketball. Kobe Bryant had passed away. Kobe, although deserving of deep encomium for his 18-time All-Star appearances, will most closely be remembered to all as 5-time NBA champion for the Los Angeles Lakers. After weeks of tributes had been poured in from the world, especially in the hearts of the Lakers fans, the world understood that a fire had been lit inside, a heavily debated greatest player of all time, LeBron James, and All-Star and mentee of Kobe Bryant, Anthony Davis. This season, this quest for a 4th championship for LeBron a 1st for Davis, and a 17th for the Los Angeles Lakers, was for Kobe.

After the coronavirus struck the world, the Los Angeles Lakers were left with little hope of a season, a season that meant so much to them. This changed when the NBA announced that the season would be resumed in a “bubble” structure in Orlando, Florida. Teams would be isolated from their family and society for about three months as they continued to fulfill their seasons. The Los Angeles Lakers went into the bubble knowing they had secured a spot in the playoffs, but still needed to clinch a 1st seed placement. The Lakers secured the placement by the end of the regular season and prepared to enter the playoffs. The first game in their playoff schedule was against the Portland Trailblazers, who the Lakers beat in a series 4-1. The Lakers had announced prior to the conclusion of their first playoff series, that if they made it into the second round, the “Black Mamba” jerseys would be unveiled, and thus, they were. The jerseys, designed by Kobe Bryant before his death for the team, featured a main black with gold trim along the sides and around the Lakers logo. A heart with a two in the middle was also placed In the corner of the jerseys, represented Kobe’s daughter Giana (Gigi). The Lakers handled their second opponent, the Houston Rockets, the same way they had handled their first, beating them 4-1 in their series. In this series, the Lakers won game 2 in their “Mamba” jerseys, gaining them their first playoff win in the Kobe Bryant designed jersey. The Lakers advanced to the Conference Finals, squaring off against a strong Denver Nuggets team along with their superstar front men, Jamal Murray and Nikola Jokic. Donning their “Black Mamba” jerseys, the Lakers came into game 2 of the series as always, hoping to win. Although it took nearly the entirety of the game, with 2.1 seconds left on the clock, Lakers point guard, Rajon Rondo, inbounded the ball to Anthony Davis for the win. Davis collected the pass from the three-point line, rose up for the shot, and knocked it down, winning the game for the Lakers. As Anthony Davis ran to celebrate with his teammates, cameras caught Davis yelling the name “KOBE!” as he rose to embrace his teammates. After the game, Davis was quoted by reporters as saying, “We never want to lose in these jerseys.”

The Lakers ended up winning the series 4-1 and advanced to the NBA Finals to play the Miami Heat. The Lakers wore their “Mamba” jerseys again in game 2, which they won. The Lakers again donned the jerseys in game 5, but, due to athletic heroics from Heat superstar, Jimmy Butler, Miami handed the Lakers their first loss in the “Mamba” jerseys. The Lakers would go on to complete their season winning the NBA champion in game 6 of the Finals, winning the series 4-2. Their quest for a championship, in a year that seemed so filled with pain, was recognized as the Los Angeles Lakers were 17 time NBA champions. The impact of the “Black Mamba” jerseys in this serious was largely felt, via a comparison provide by ESPN, Lakers stars LeBron James and Anthony Davis’s stats were compared to when they were wearing the “Black Mamba” jerseys and when they were not. Throughout the majority of the playoffs, LeBron and AD average 58.0 points per game in the “Black Mamba” jerseys, had a field goal percentage of 60%, and shot 3-point field goals at a percentage of 46%. With comparison to the other jerseys they wore, LeBron and Davis had 54.3 points per game in other jerseys, shot a field goal percentage of 55%, and shot 3-pt field goals at 35%. It should also be noted that in the playoffs, the Lakers boasted a record of 3-1 in the “Black Mamba” jerseys. The season dedicated to Kobe Bryant from the beginning, concluded in the most Kobe Bryant-esque way possible, a championship for the Los Angeles Lakers. The importance of Kobe to this team was best summarized by Lakers general manager Rob Pelinka, after the Lakers had won the championship. “There would be times in the middle of the night, I would hear his (Kobe’s) voice: ‘Stay the course. Finish the task.’ To be able to have a friend who changed my life and helped me understand what greatness was about and sacrifice was about, there’s not many greater gifts. To be able to share this moment right now, knowing that he and Giana are looking down from heaven, and I know he’s a proud friend – I know he is.”