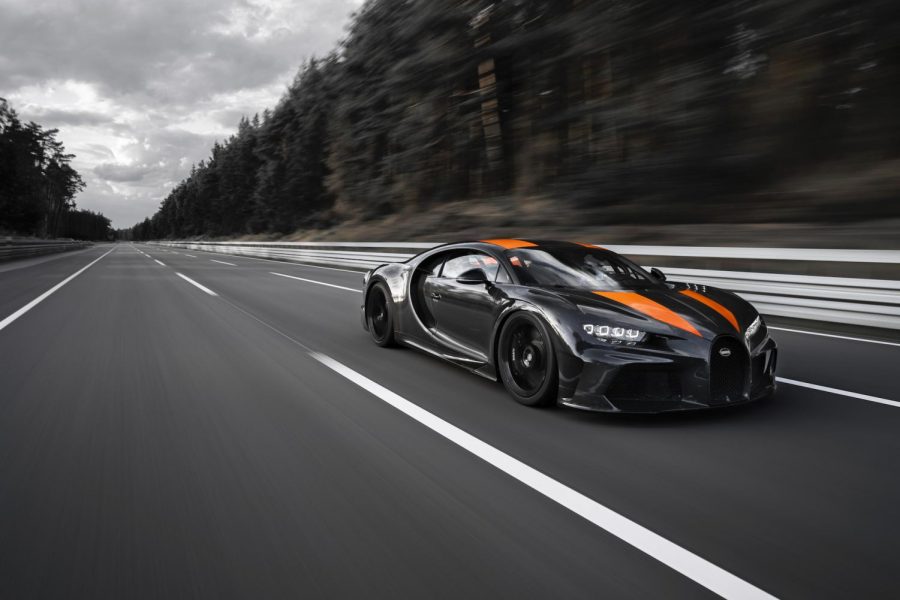 You are sitting in the cockpit of a vehicle. You are sitting low to the ground in your seat, strapped in tightly. Around you, there are flashing displays surrounded by intricate buttons and dials. Almost everywhere you look, you can see the shine of dark carbon fiber. The body of the craft you are in has been painstakingly developed for weeks, months, years. Every little detail has been debated and toiled over by countless engineers trying to ensure the success of the mission and your safe return home. You hear a voice through the radio in your headset begin to count down: 10… 9… 8… No, you are not in a spaceship that will carry you to the stars. But you are in a Bugatti Chiron. And as you firmly grip the leather in your hands, you know that the car you are sitting in, which is available to the public, is about to carry you through the air at 300mph using just four wheels and an engine.

In November of 2017, the Koenigsegg Agera RS achieved a top speed of 277.9mph on a closed-off 11-mile section of Route 160 in Nevada. The Agera RS is a two-door two-seater with a carbon fiber chassis and ground clearance as low as 85mm. The brainchild of Swedish engineer Christian von Koenigsegg, it sports a 5L V8 engine and a 7-speed paddle-shift transmission, as well as a dynamically active rear wing and active independent front flaps for increased downforce. The Agera RS’s 2017 run smashed the previous top speed record of 267.8mph held by the Bugatti Veyron Super Sport since June of 2010. Since the Agera RS’s record-breaking run, several car manufacturers have been racing for the 300mph milestone.

The manufacturers at the forefront of this fight for the record were Bugatti, Koenigsegg, and Hennessey. A number of lesser-known brands were chasing the elusive top speed as well, although most believed that it would be accomplished by one of the more prominent manufacturers if it was possible at all. Many skeptics had doubts regarding the durability of modern tires to handle the speed and the ability of engineers to produce an engine with enough horsepower.

On September 2, 2019, Bugatti announced that a version of the Bugatti Chiron had reached 304.773mph at the Ehra Lessien test track with Le Mans winner and test driver Andy Wallace in the driver’s seat. A GPS system recorded the run and car’s speed, which was verified by a third-party. So, how was Bugatti able to accomplish this?

First, there was the issue of tires. Bugatti collaborated with Michelin to develop a specially designed, street-legal set of Pilot Sport Cup 2 tires made with reinforced belts to handle the strain the speed would place on the tires. Bugatti held that Michelin tested the tires up to 317mph before the Chiron’s high-speed run took place.

Then there was the issue of the car itself. To the untrained eye, it may look like just another exotic car. But those familiar with the Chiron will see that the car used differs from the base Chiron in several ways. The front end of the car sports unusual front fenders with holes for airflow and differently shaped front intakes. In the rear, the exhaust tips are stacked two per side, there is a large diffuser, and the rear end as a whole is significantly longer than that of any version of the Chiron in 2019. The new variant contains Bugatti’s signature 8-liter W16 engine with 4 turbochargers, capable of outputting 1,500 horsepower, although it was likely altered to increase this figure. This new derivative is also lower to the ground than its predecessor.  Combine this amount of power with the lightweight materials used in the car, such as carbon fiber and titanium, and it is not difficult to understand how the Chiron could reach 300mph.

So that’s all, right? A production car has gone 300mph, time to go home. Not necessarily, says John Hennessey, the big boss at Hennessey Performance. He claims that because Bugatti only did a one-way run instead of a two-way run, meaning the Chiron hit 300mph in one run rather than running twice and getting an average speed of 300mph, they cannot officially claim the accomplishment and the plans regarding the Hennessey Venom F5 have not changed.

This seems to be the consensus among the rest of the competitors as well. The SSC Tuatara performed a two-way 331mph run in October of 2020. In addition, the new Koenigsegg Jesko Absolut is expected to break 330mph, although this is now somewhat less impressive due to SSC’s accomplishment.

Even Bugatti does not seem to be slowing down (I promise that was accidental), despite remarks that they are bowing out of the top speed competition. In October, they revealed the brand-new, monstrous Bolide, which has an expected top speed of 310mph. This may seem underwhelming, but the Bolide will be a track car only. Its statistics are not far off from that of modern Formula One cars; in other words, it is not built for record-breaking top speed.