Devil All the Time Movie Review 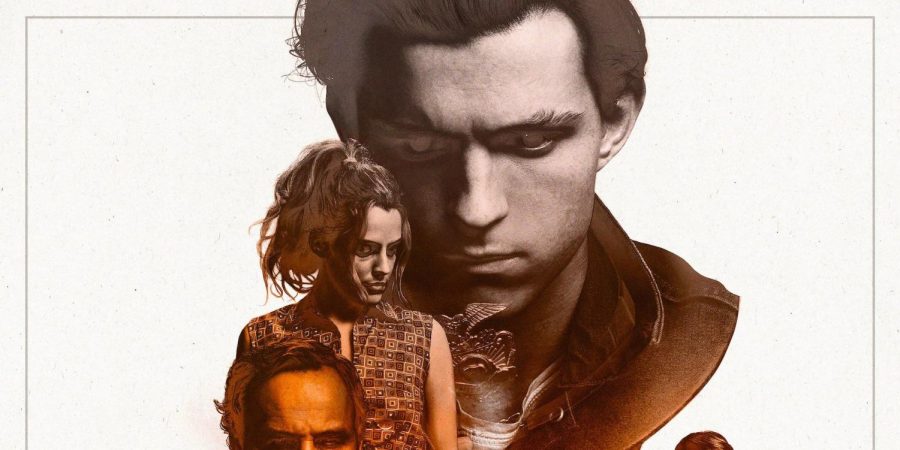 Directed by Antonio Campos, “Devil All the Time” is an uninteresting and bland tale about religion in the deep south that is saved through the use of impeccable acting and worldbuilding. The characters of the story are three dimensional and show an overflowing ark throughout the story that can be followed and interpreted in ways unique to each character. From the rusted vehicles to the crumbling and mold growing on the houses, the overall setting of the story is perfectly crafted and takes the viewer into the world of the film. What really carries the movie, however, are the stellar performances by Tom Holland, Bill Skarsgard, and Robert Pattinson. With each of the three actors molding themselves into the characters they are trying to depict through the perfecting of deep southern accents, emotions, and mannerisms, “Devil All the Time” should be labeled as a contender for Best Picture, but because of the focus on worldbuilding and the development of characters over the story, there is something missing. Campos tried to create a perfect example of modern cinema without focusing on the narrative and thematic aspects of the story.

There is an underlying theme of repetition hidden under the sinner’s flaws and misunderstandings. The movie starts off by following a father and son. The son doesn’t look directly up to his father as a hero, but instead uses his father’s teachings to establish his own morals. Both the father and the son will do anything, even if it is a terrible act, as long as it protects those that they love. Neither of them are intentionally evil people; they just wish the best for those around them. They even understand that what they are doing is wrong, but their own morals will not stop them from keeping those who they love safe.

Another example of repetition in the film is a mother and daughter who fall in love with the lies and false tales of the two preachers in the story. The mother and daughter both fall in love with preachers and are eventually killed by them. The mother is stabbed in the neck because her lover thought that God would allow him to bring her back to life if he committed this act (similar to the story of Abraham and Isaac where Isaac was sacrificed to God to test Abraham’s faith). The preacher thought that God was testing his faith and that after he killed her, she would come back to life. The daughter, on the other hand, was told to kill herself after she birthed a bastard child because of the shame that it would bring to her family and the thought of her family’s name being tarnished.

The last form of repetition in the story comes from a couple and the young men that they seduce. The couple offers hitchhikers a ride to whatever destination they want. The couple takes a break in the woods for a picnic and eventually offer the hikers sex with the wife as long as the husband is allowed to take photos of them. After having sex with the wife, the hikers are killed off and the couple goes off to find another person to seduce and kill.

The three actors that carry the movie consist of Tom Holland, Bill Skarsgard, and Robert Pattinson. Each of these actors brings a different take to characters that could have been bland and unoriginal. Sinners from the south are not very interesting topics just by themselves, but through the performances of each actor, they become personified through emotion and triumph. Each one of them shows that their characters do not believe that they are doing anything wrong and that they are doing it for the sake of others. For example, Tom Holland’s character, Arvin, is trying to protect his family and help those who are defenseless. Holland gives an incredible performance that is the highlight of the film in some regards. Holland’s character is delved into the most out of all of them and you can truly see the flaws and the thought process behind each of his decisions. Holland is disturbed with what he is doing but still continues doing heinous acts for the sake of others.

Skarsgard’s character is similar to Holland’s because he has the same moral beliefs as him. He wants to protect those around him and save them from all harm. This can be seen most clearly in the things that he is willing to do to protect his wife from death after she becomes sick. Skarsgard creates an alter in the woods of their home, with this alter symbolizing his mental fall. Over time just like Skarsgard, the alter begins to rot and becomes corrupted. Instead of the daily moments of reflection that it was used for, it is now used for the crucifixion of the family dog and the violent prayer ceremonies, that involved him screaming and tormenting his son. Saying that the son wanted his mother to die, and that he wasn’t praying hard enough to really save her. Throughout the short run time that Skarsgard’s character is involved with the film, he becomes completely twisted from his previous life and is a shadow of the person that he used to be.

Finally, Robert Pattinson plays the preacher who just comes to town. He is a smooth talker and, like the devil himself, is able to manipulate and control those around him. On the outside, he is a handsome, charismatic guy who is just trying to help the world through the gifts that he was given by God. Behind that bravado, however, is someone who is overcome by lust and wants all the earthly goods possible. Pattinson delivers his character with a southern rasp that does nothing but help strengthen his false identity. Pattinson became known for saying the line, “Delusions!” This summarizes his character as a delusion and the fact that he is not as good as everyone thinks that he really is.

The storytelling is simple and there is very little depth besides the creation of the characters and the plot. Everything is incredibly basic and can be easily followed by the viewer. Just by assuming and guessing the worst possible outcome for each character, the viewer is able to perfectly guess and tell the story for the rest of the movie. In directing the movie, Campos seemed to be more focused on building the world and trying to have the viewer fall into the atmosphere of the story rather than building a proper narrative. Besides the exceptional performances by Holland, Skarsgard, and Pattinson, there is nothing to separate this movie from any other. Because of these flaws and lack of storytelling, the movie is nothing more than a boring Oscar-bait.